As soon as I got back from the LEC contact, I tried to capture some of the highlights on that day itself. Although it did not shape up into a detailed report, with a gentle nudge from my mentor – Theju, I will attempt to share some of my learning and experiences here. Sujata was apt to remind us, toward the end of the contact that we were in a bubble during the contact. And this was soon to burst!

On Monday during our fortnightly meeting of the Mobile Outreach Program, I was asked to share my learning’s from the LEC Contact and fell short of words to express such an immense experience. Two of the main learning’s were shared as:

The part of the first contact that surprised me the most was the Library Building Exercise towards the end of the contact. Although I had seen a sticker on ‘I built a Library’ when we were preparing our own library cards in the beginning of the contact to borrow books, it did not strike me that we would actually be building something, even as a demo. This exercise made us reflect on the essentials of what makes up a library and the prioritization exercise earlier in the contact. People and collection always came first and when we were looking for a place to setup our library on the campus we felt freedom because space is always lower on the priority list of the library.

What still amazes me is how the sessions were threaded together like beads in a necklace, each one preceding the next. Each session prepared us for something that came next; a slow realization that hit me somewhere during the middle of the contact. Each choice was carefully made. After initial handholding for reading by Usha and Theju that went into the later parts of the night, we were left to explore readings and make presentations on our own and in groups. As for the film on Freedom Writers, although I had seen this film before, this platform provided me with fresh insights. What is impressionable is the almost therapeutic use of writing and the ­­­­teacher’s determination to change her student’s lives that she achieves in the publishing of their stories, hidden inside them.

On Tuesday, I had to lead a Read Aloud session for seniors and I picked a book that I have been putting back for a long time. Something that happened during the contact allowed me to relate to the Meghalayan folktale, A Race of Two Rivers. Perhaps it was the stories of my roommate Yonden from Tibet that allowed me to do so. He also shared a local tea recipe that promises to be as fresh in the evening as it was on the morning it was prepared. It is made with water, milk, butter, salt and a local tea leaf. Although I cannot imagine its taste, Yonden swears by it. Thukpa is their staple diet, a kind of noodle soup.

On Wednesday, we went to do a Read Aloud session in a new location in the far reaches of eastern Goa, near to the Western Ghats (Sujata had worked hard to set this up.) As I think of this session I am reminded of the discussion on Studying Childhood in India by Krishna Kumar. While the paper discusses the Idea of Protection in terms of Physical protection of Children from Induction into work and from the knowledge of sexual good and evil, it concludes that in the Indian Context ‘ the child is back to being vulnerable in a boundless world.’ While our small engagement with these children might not be a major achievement, one hopes the best for these children as any other in India and hopes that the world of books opens windows in their tender minds and sows a seed of knowledge and reading in the world.

On Thursday, I was down and out.

On Friday, Theju asked us to write this blog. No escaping now; so while this has given me time to reflect, I hope that at least some of this sharing will be helpful to those within and without the LEC contact. Every time I end my procrastination or find time to write I am reminded of Jane talking about the Point of Utterance (James Briton) and how the act of writing is so integral to the world of our thought and the people outside it.

On Saturday during a Read Aloud on a book dealing with Memory, ‘Wilfrid Gordon Mc Donald Partridge’, one of the students asked me if it was a true story. I remembered Vladimir Nabokov saying in an article that ‘To call a story a true story is an insult to both art and truth’; because it is in the act of storytelling that creation and enchantment thrive. At the same time Chimamanda Ngozi from Unit III calls out a warning in the ‘The Danger of a Single Story’ and Sujata warns us against using quotes out of context. So I urge the readers to read any writings that have been referred to or quoted during this write-up before forming their understanding.

As I wrap up this article, Jane’s introduction to the word ‘Mamihlapinatapai’ feels like something that cannot be left out even as it was a start to our discovery of words. It means ‘a moment of meditation’ when grandparents are passing on their stories to their grandchildren. It is that moment of silence in between. She feels that a story is never the same and changes with the story teller and the audience.

My body clock says it is now time for Astha Chal a routine I have barely managed to keep and yet I feel it every day in the evening when I have some quiet time.

Wishing strength and courage to all those who are on this journey, and much reading. It is difficult for me to capture every part of the contact in this writing and in trying to tie up the loose ends, Victor Sensing’s article keeps popping up on my list of things to grapple with followed by the interesting literacy games conducted for us that brought out the children in us, reminding me that everything we read about children, and for children also reminds us of the child in us. 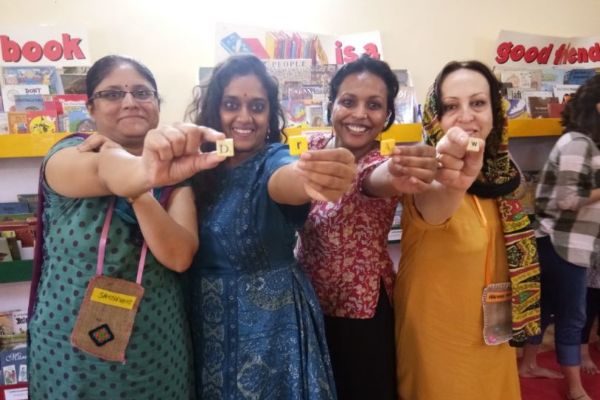 When Learning is Handcrafted…

I saw Ludwig Mies van der Rohe’s aphorism ‘God is in the detail’ come alive as I walked into the LEC 2018 classroom in the St Joseph Vaz Spiritual Centre in Goa. 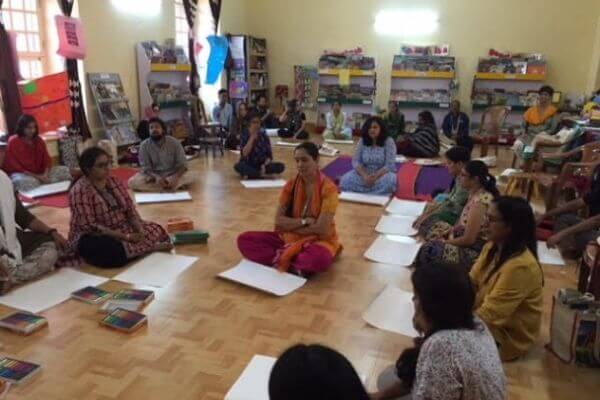 I  experienced   the ‘joy in reading out books’ first hand when I read them to my son in his early years.