A Sense of Smell

Blog By Sandhya Rao Under Parag Reads On 28th November 2022

My Name is Gulab by Sagar Kolwankar, published by Tulika Publishers: Book Review

Some books make you sit up and think. My Name is Gulab is one of those. It takes you out of your own little world, made up of your own little concerns, and says, ‘Open your eyes. Look! This is the world. The real world, especially for some people. Different from yours, yes, but real as your own.’

The issue this unusual picture book attempts to tackle is manual scavenging, a shameful, dehumanizing practice that forces certain sections of the Dalit community to manually clean latrines, drains sewers and septic tanks of garbage that includes human excreta. Although attempts have been made over the long years of this practice being prevalent in India to mechanize the process, you still see the job being done manually. The people who do this work and their families are shunned by society, forced to live far away from ‘other’ people, and are generally considered ‘dirty’ – never mind that they do our dirty work. In 1993, a law was passed banning the employment of people as manual scavengers; unfortunately, the practice persists.

Although this troubling issue is at the heart of this picture book, the story uses it as a diving board to tell a small story from the life of Gulab, whose father works as a manual scavenger. In school she is teased for this; children accuse her of smelling foul. She doesn’t smell bad, she knows she doesn’t, but the constant teasing is humiliating and she wishes her father didn’t do what he does. It’s only after her father explains a few things to her that she kind of gets the picture and by the time project day comes along, she has a brilliant idea that links her project to her life.

You cannot get away from the fact that this is a ‘teaching’ story, one that seeks to get the message across. Hence the monologue about manual scavenging from Gulab’s father. What’s a nice touch, though, is the fact that although Gulab ‘invents’ a machine that supposedly will keep her father from physically diving into the gutters, the contraption only signifies an idea, it doesn’t actually magically work. And, in a great lesson for teachers, Gulab’s idea receives praise, and the fact that she attempted something like this. This aspect resonates and, if I may be personal, particularly with me, because I once had the good fortune to be similarly acknowledged by a sensitive teacher who saw the worth of my effort and ignored the lack of finish or finesse.

This really is the strength of this story, as also the feelings of humiliation and worthlessness on the part of Gulab. Her parents display a sort of stoicism we associate with the oppressed, although they seem to have far greater inner resolve than may be the case in real life. We must assume that this one incident does not change Gulab’s life, but it certainly sparks in her a desire for change and to initiate change.

In other words, it’s not a perfect story, nor is it brilliantly told. It uses common tropes and even some stereotypes. Yet, it touches you because of the sincerity of purpose and the relevance of theme. It makes the reader empathize with the subject and definitely offers several opportunities for discussion both on a one-on-one level and in the classroom. I’d go so far as to say this is the ideal picture book to share in the classroom; the potential it offers for self-reflection and awareness-building is not to be missed.

My Name is Gulab is part of the Parag Honour List 2022. You can buy it here.
Sandhya Rao is a Chennai-based journalist, children’s writer and editor.

This wordless picture book by Eklavya takes us through various complexities of the environment. I loved the concept of this book… 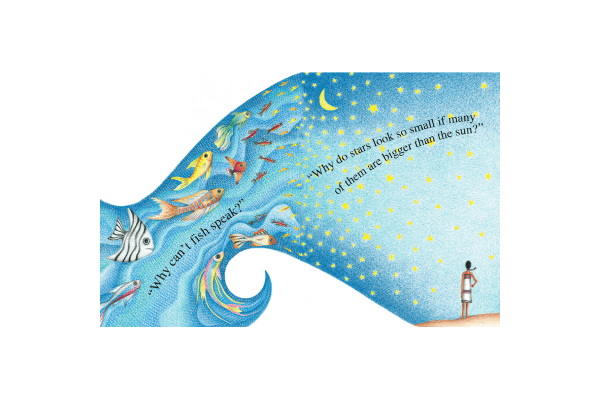 “Blessed are the curious, for they shall have adventures!” The evolutionary theory of Neoteny maintains that curiosity is inherently a child-like trait…